No Facebook Profile? Are You a Psychopath? Get a Page, Set Up Your Privacy Settings in 3 Steps w [Video]

Just a short while ago it was considered taboo for people to be frolicking about socializing, chatting, engaging, liking and poking the many people on their  Facebook pages. Employers were caught off guard and people were unprepared and not equipped to handle the growing Facebook/Social Media phenomenon.

Employers are rebounding, implementing social media usage and policies into their organizational structure and realizing that social media can be a huge part of their digital marketing strategy. Employers are not shying away from social media as they were in the initial phases of the social media revolution.

Employers are now realizing the benefits of having the ability to check out their future employers by way of social  media channels before they invest any time in them as a potential candidates.  They are starting to realize that Facebook with over 900 million users is the norm for communication for so many. It is also now recognize that socializing by way of social media is such the norm that not to do so could even be considered abnormal.  Some are going so far as saying that the people that have an absence of Facebook profile could be psychopaths. I think that is a rather strong statement because I know a few perfectly normal people that chose not to be a part of the Facebook revoloution due to their need to have a private life and not share every detail of their lives. That is totally understandable.  Maybe we should all question why we WANT to share so much. LOL However that is another post all together, which may come under the Social Media people are narcissistic  category.

The philosophy that there is something abnormal about people that are NOT involved with social media is being applied not only in the workplace and employers but to personal relationships as well.  Some even suggest that if a person choses not have a Facebook page we should be wary about dating that person because they are suspicious and could have something to hide. Again, I am not so sure about that and I find that sometimes it’s just not that black and white.

Employers are now taking a new found respect for social media and using it not only to find applicants in a recruiting sence but also using it as a way to red flag people that could potentially NOT be such a great fit for an organization. This is an amazing use of social media and could prove to be very beneficial to many organizations. We have come a long way baby, is all I have to say!

So, since this is now the NORM it is beyond time to make sure you are on point with your online presence.  Yes, time to clean up that Facebook page.  The key to starting with this project is to really allocate some time to getting this done properly. I was a strong advocate of setting and fully utilizing privacy settings as soon as I started my social media Facebook journey. I actually wrote and ebook about it but due to so many of the revision to Facebook the ebook is a bit obsolete although the basic principles remain the same.

The first step is to set up Facebook Lists, this will allow you to share all of your status updates with who you want to, and exclude others. For instance if you are friends with people at work, they may not want to see a picture of your crazy Uncle Buck playing Beer Pong in his boxers, however your family may love it. So if you create a list for Family members that think Uncle Buck is a laugh riot you would be able to share that JUST with them and not everyone on your friends list.

Second step is to share some information that is funny or positive to the public. This allows this content to be viewed by your public or people that have subscribed to your public updates. This is great information that you could use  to give people a view of who you are. So remember to share great content, things that make people laugh or that touches their heart. You can do this by creating a status and posting it only to the Public list using the drop down menu at the status area where you will be posting.

Third Step is to remember to share the information with the appropriate audience when you post a status update.  It is very easy to forget when you are posting to your status to allocate the right list. The good thing is that if you forget to post to a particular list or if you are unsure you can always go back to that post and change it. 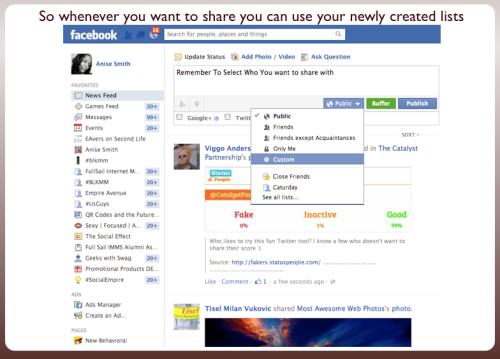 Take a look at the short video below that will give you a visual of how to get this done quickly!


Ok, stop reading and viewing the video and get to work.

As we acquire more Social Media Channels the workload related to maintaing these channels tend to grow until you notice that a good portion of your day is dominated by maintaining your social media channels. Don’t get me wrong if you are in any business there MUST be a certain degree of time that must be dedicated to social media. If you are in a social media driven industry you it is not even optional, you must have your game tight because your social media footprint is a resume of sorts.  So as you display your capabilities by way of your social media presence, the amount of hours sucked away by doing this can add up and become overwhelming unless you get a handle on it.

I was very resistant to using a lot of the tools that are available to help effectively manage an online presence, foolishly so I admit. I am the first to acknowledge and rectify any mistakes that I make. After that I write about them 🙂 I hear a lot of opinions on scheduling and/or automating, I think we all reach a point when it’s not even optional anymore. We are physically only able to do as much as time allows, so at some point, some portion of social media will just HAVE to be scheduled and/or automated.

So, I recently have started using a few really amazing applications to schedule my post, which have  substantially assisted in time management in regard to social media and marketing of my online presence. I tend to want to dive into any and all new platforms so I end up spending so much time using these that it becomes very time consuming.  Well I am using the following:

LaterBro is a free application that allow me to set up my tweets. So far so good and I am loving this because it allows me to take just a bit of time to schedule everything.  This has decrease the huge push of content at one time, spread my content based tweets out in increments and increased my ReTweets. I love that I am now allowed to send more content without being chained to my computers. Since setting this up I am now able to engage more with friends and followers. Set it and forget it!

Buffer is amazing as well, I just started using this application also.  I use the FREE version of Buffer and I only use it to schedule my Facebook Page posts. Buffer is a very powerful tool because after you start to use it you notice Buffer as an option for Twitter and this allows you to add posts that you’ve viewed. You can then add that content to your Buffer to be posted later.  There is also, a Chrome Extension that offers the same capabilities. AWESOME SAUCE!

WordPress Tweet Old Posts allows you to tweet some of the old posts that you’ve created that some people may have missed. This is amazing because it allows me to supply friends and followers with content from my QR Code blog that may have been missed in previously postings.  This, too is huge because it allows a lot of great content to be read and shared.

Due to the implementation of these tools I have been able to keep my promise to my father & son that I would get more sleep and manage my time better. As usual, I welcome any dialogue so feel free to leave a comment here, catch me on Twitter or post directly on my Facebook or Google+ Page.

t. t. thomas /// staying alive while getting there

"Caring for myself is not self-indulgence, it is self-preservation, and that is an act of political warfare." - Audre Lorde